The Future is not what it used to be was made while the corona epidemic was around. Suddenly the world was at a standstill and all kinds of restrictions were imposed on us. To what extent did this influence the development of the performance? How did choreographer Pia Meuthen and the performers deal with it? What was possible, what was not? And how differently do you perform for only a limited number of audience members?

Pia Meuthen: “The first idea for a performance usually occurs with me a year in advance, I need that time. Also for a practical reason: the performance has to be sold ahead for the new season. In the summer of 2019, I knew that I wanted to create a performance about time and our experience of time. About how time is looked at, what time means to people. About a future that will always be uncertain”.

“For each performance I do an artistic research. I then compile a collection of literary sources related to the theme; scientific, philosophical, but also examples of how directors or visual artists have worked with the theme. For The Future I did this for the first time together with theater scientist Guido Jansen; a very inspiring process, as he looks from an other point of view and personal interest and therefore comes up with new, different sources of inspiration. We definitely continue to work like this more often.

Based on the ‘research archive’ I then form the parameters for the performance: what influence do themes and research have on the movement language that I want to create? What does it mean for the set, for the relations or nonrelationships of the characters with each other, for the music, for the tension curve? All of this forms my starting point, the concept which shows what I want to investigate. So it says nothing about what the performance will look like in the end, but it forms the framework that I give my artistic team and with which I work and observe during rehearsals and improvisations.

For The Future I came across a quote during the research that well expressed where I wanted to go: The bad news is: we are in freefall. The good news is: there is no ground. I liked that realisation: that freefall, the continuous insecurity you are in when you have to relate to changing circumstances. I translated that into floating and hovering, hanging on to something, being moved by something – those are the movement qualities I wanted to use in The Future”.

“Before we go into the studio, the scenery has to be finished: we improvise in that space. The performers enter this space quite uninformed, they have to be able to explore the set neutrally as I want to experience their first physical impulses. Our process must have an openness to the moment, and to the people who participate. That freedom must be there, that is what I wanted with The Future.

In the spring I discussed the theme with set designer Sammy van den Heuvel – I initially wanted a set that resembled a space during an explosion, with objects suspended in the air and the performers floating in the air. Sammy then came up with his own interpretation of which he made drawings and eventually a scale model. And then corona struck… The décor was built in Antwerp, but Belgium went into a complete lockdown. As a result there was a delay, the decor couldn’t come here, we couldn’t test it. Just before we started rehearsing, only part of it was finished.

And the rehearsals also had to be adapted. Because of the lockdown not all foreign performers could come to the Netherlands for the first meeting, some of them were only available online. And once we were together, we had to follow the rule of keeping distance: we were not allowed to touch each other. Very strange, we are used to dealing with each other very physically and now we placed lines on the floor: these are your meters, you are not allowed to leave this compartment”.

“We worked for two weeks following the rules strictly, in the third week we let go of those lines a bit but still didn’t touch each other. It wasn’t easy to get used to the not touching. On the contrary, we are very good at partner work, that’s familiar, our comfort zone. Now we had to look for other ways, which resulted in a special awareness of each other. Very exciting. Knowing that you are not allowed to bump into the other person leads to a very different sensitivity in dealing with space and each other. It also gave security; we were one of the first companies to start rehearsing again, there was still a lot unclear about the virus. At home there were all friends and family who were wondering: is it really responsible? By working like this, we also offered them security.

Whether The Future has turned out to be different than I had planned because of the coronary restrictions? Yes and no. The initial idea of the other person as an anchor, that within all uncertainty you can have a certain physical hold on to each other – that fell away. But something very beautiful and interesting took its place: a kind of tragedy, not being allowed to help and touch each other. It was also very strange that at first people did not notice this lack. At some point I sent rehearsal videos around and asked afterwards: did you see that they didn’t touch each other? Nobody had noticed. Then it’s okay, then it’s not over the top”.

“And then there was the premiere, at the Verkadefabriek. Until the last moment it remained unclear whether and for how many people we were allowed to perform. So we were very happy that it happened, we always said: we’ll finish it. And yes, performing for only eighty people is of course not the same as performing for a full auditorium of three hundred. The tension is different, it feels weird. But it’s also beautiful: you feel a great focus from the visitors, the people who are there have really chosen to do that, they are enormously concentrated.

What to do next? We have to wait and see what can and can’t be done these months. It remains exciting, everyone realizes all the time: it can’t go on just like that. A performance becomes better if you can play it a few times in a row, and in the interaction with the audience a lot of things happen – we miss that now. But fortunately we were able to make a registration, so we know exactly what we did.

If we can’t play this season, The Future will be put on hold for next year. I really believe in the performance, I am very happy with it. For the result. But also for what it has brought us in terms of new insights; it was an interesting process, with its limitations. In the meantime I am really looking forward to being able to touch each other again. I’m realizing in this period more and more how essential physical contact is and I really want to show it in my work.” 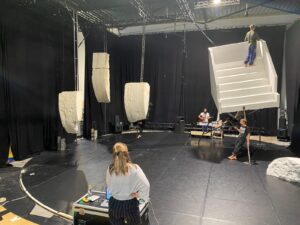 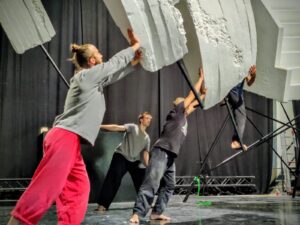 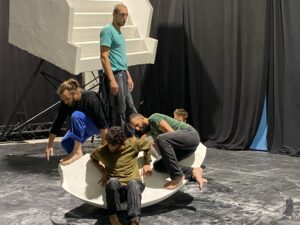 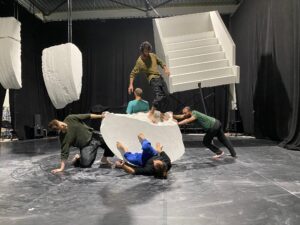